I believe all people have the need and ability to create. Using various art and therapy methods I provide a safe and empathetic environment, to encourage life-enhancing expression that brings wholeness, physically, emotionally and spiritually to people's life.

Greetings,
It has been a half a year since my last post. What is happening in your world? What does your world include?
The beginning of this year could make some of us very disheartened by the increase in discrimination,  outright hate, and judgement. It does make me very sad to believe that people want to limit each other's potential and growth by sending messages to each other that controls and restricts us from being who we are meant to be.

In the last year, I have been exposed to the effects of discrimination and control on several groups of people. The long-term impact on people's lives and their ability to overcome the trauma, self-hate and self-judgement is overwhelming. I provide healing presence for those who have experienced trauma and discrimination on multiple layers and levels; hate, abuse, beatings, (and more) on those who identify as LGBTQ2; those who have less power; those who are perceived as being dispensable - including children; and women...

I think for me, the impact on how our society, systems and especially religions controls women has been the most upsetting. The use of the law, distribution of money, distribution of power, enforcement of 'cultural and religious practices' all make woman less than... and contribute to how our society ALLOWS women to be seen and treated as less than. I never would have thought that I would say it ... but I believe I have become a feminist. Feminism does not mean a brow-beating, man-hating philosophy... Rather Feminism means that we are all created equal; and supporting and empowering women is only BUILDING our society to be healthier; to use and implement all of its resources. Feminism means empowering and supporting one another.

Feminism aligns with my belief in a God who is ever present; who works through us; who moves among us; ALL of us ; not just the men.

I leave you with the Womanly Living Tree. May you be able to grow as God intends. 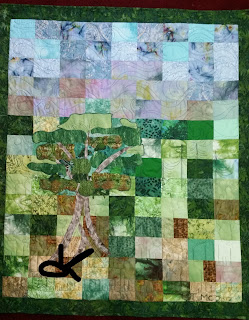 As a professional art therapist, and registered psychotherapist, I provide therapy services.
I use art therapy to support the expression of beliefs, emotions and experiences which are difficult to verbalize, using different art methods. These methods include paint, pastels, clay, movement, dance, drumming and more.
Using an eclectic approach, focusing on the client's goals, needs, and utilizing a supportive relationship, I integrate art therapy, mindfulness, cognitive behavioural therapy, solution focused therapy, and sensorimotor psychotherapy.
I use art as therapy especially through the process of Zentangle. Zentangle is a fun activity - that costs little in money but reaps great rewards with peace, inspiration and calmness.
Zentangle 101.: Sat. June 1, 2019; 1:00 - 3:00 p.m.
info@bloominglife.ca
Come and learn this unique meditative art form where you will create beautiful images from repetitive pattern-making. Great for all ages. $50 including Starter Kit
Zentangle 201.
Learn more complex tangle patterns, expand your shading skills and explore tangle drawing techniques. Expand your tangle vocabulary with more patterns. $30
Meditational Zentangle: which focuses on the meditative qualities and activity of Zentangle. This is helpful in reducing stress, developing health coping mechanisms and practicing meditation. $40.00 including supplies.
Triskele Globe. Come and create a unique piece of 3D art. This incorporates beautiful Zentangle patterns, and folding into a shape that others will marvel at! Simple and Beautiful!
Contemplative Creation: The combination of meditation and Zentangle through contemplative focusing is a great way to enhance your health and creativity. this class was developed to promote the integration of contemplative activity and art. Learn a new meditation practice to enhance your life.
For more information and to register for a class. info@bloominglife.ca
I am happy to provide classes and workshops to individuals, groups and organizations in the Greater Toronto Area, Ontario